There’s a running joke among Elder Scrolls fans that Skyrim, a game that’s been available since 2011, is going to be continually re-released on every gaming platform known to man until the end of time. It shouldn’t be too shocking, then, that Skyrim now has a virtual reality or VR option. Because of the enduring popularity of the game and franchise, many gamers wonder what the VR experience adds. We’re providing this Skyrim VR review in case you have this question on your mind or haven’t played Skyrim on any of the other platforms yet.

There are good reasons that Bethesda keeps reproducing Skyrim. Above all, they know that many people are going to buy it whether they’ve played the game before or not. There’s so much replay value to get out of it due to the presence of so many storylines that somehow become a bit personal, and the immersion is second to none in this game category, in our view. Skyrim’s immersion within the VR realm is something many people would love to try out.

We intend this Skyrim VR review to give you all the information you need about the product and help you make the decision whether you want to buy this game… perhaps for the fifth time… in a new version. If this is your first time delving into the realm of Skyrim, you should definitely hold on to your hat. this Skyrim VR review is action-packed.

Quick Navigation
What Is Skyrim VR?
Product Specs
Pricing
Our Skyrim VR Review: How the Game Compares to Others
Conclusion

What Is Skyrim VR?

A Skyrim VR review wouldn’t be complete without trying to explain Skyrim itself. If you’re new to Skyrim and don’t know what to expect, our simple explanation is that this game is set in a middle-earth-type world that you can explore and do anything within. There are multiple storylines to navigate and enjoy, such as adventures involving a civil war, assassination plots, ancient civilizations, actual Hogwarts, and so much more.

The main storyline focuses on your characters, The Dragonborn, as they try to stop the end of the world. The main story arc is a lot deeper than that if you want to get into the entire Elder Scrolls mythos, but it may be enough to learn that you can shout zombies right off a cliff. We wouldn’t be in the business of producing Skyrim VR reviews if we couldn’t explain it in layman’s terms like that!

Those already familiar with the game should know that Skyrim VR for the PlayStation 4, for example, allows you to delve into a “vanilla” version of Skyrim and wander around dungeons and cities as if you were actually there (just in case the usual version wasn’t immersive enough). You may think the dragons are going to be the scariest creatures within the VR experience, but just wait until a spider hurtles at your head.

Skyrim VR for the PlayStation 4 comes with the core game plus three official add-ons: Dawnguard, Hearthfire, and Dragonborn. There is also a PC version available that requires an Intel Core i5 or AMD Ryzen 5 1400 processor with at least 8GB RAM memory.

This product can be found on Amazon, in its PS4 version, for around $40.

Our Skyrim VR Review: How the Game Compares to Others

We picked a few similar products available on the market to see how they compare.

This product can be found on Amazon for around $$.

Skyrim is a game known for allowing players to jump right into the action and find whatever kinds of action they want. It shines as a gaming experience when you decide to do your own thing, setting your own path and goals. The classic quests already in the game are still a lot of fun as well.

If Bethesda is known for one thing above all, it’s their graphics quality. Because Elder Scrolls and Skyrim specifically provide such a large, open world that has such stunningly good graphics, you’ll inevitably have a few glitches. Watching people float into the sky, giants riding dragons, and guards swimming after you through the streets of Riften are just part of the charm of this immersive, graphics-rich experience.

The story is anything you want it to be. No two play-throughs will ever be the same. That said, if we’re going strictly by the main quest storyline, then you’ll find yourself strapped in for an incredible journey with some interesting twists. All of the other quest lines are just as interesting and rewarding to navigate and complete, so you’ll be at this game for a long time.

You can do just about anything in Skyrim, which usually makes people want to do everything in Skyrim. The replay value alone is phenomenal. Do you want to roleplay as a character from your favorite television show? Done. Want to become the strongest lizard wizard? Go for it. Want to collect every head of cabbage in the land? You won’t be the first. Again, there’s a great reason this game has kept coming back in various iterations since 2011, and that’s because it’ll keep you busy for years. 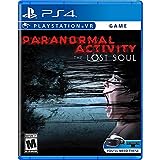 To balance this Skyrim VR review, we’ve also taken an in-depth look at other games on the market. This first one is a horror game based on the Paranormal Activity franchise. It is built around an original story in which you must solve a mystery in a truly horrifying and dangerous setting.

This VR game can be found on Amazon for around $$.

There is not a lot to do in this game other than walking around, solving puzzles, and trying to remain calm in a terrifying environment. However, this is the whole point of the game, and it is a really fun experience all on its own.

This game’s title may sound like an homage to Lost In Space, but it’s not. Robinson: The Journey is based around a young boy whose spaceship crash- lands on a planet inhabited by dinosaurs. It’s up to you to solve mysteries and stay alive amongst those prehistoric creatures.

The game is rather easy to pick up. There are very few options in the way of controls, but this is a survival game, after all. The key to staying alive in games like this includes building, farming, gathering, and prioritizing needs.

This product can be found on Amazon for around $100, making it the most expensive item by far listed in this Skyrim VR review.

The graphics throughout our experience playing Robinson: The Journey were absolutely stunning The world has incredible depth and amazing visuals. It takes place on an alien planet with a lot of gorgeous flora to check out along with your dinosaur companions and foes.

The story is one you’re thrust into and learn more about gradually. There are plenty of mysteries to uncover and a lot of surviving to do along the way, so the story may end up being far more compelling than you initially think.

This is a great game to check out, especially for those who love other survivor games like Minecraft or Subnautica. Unfortunately, it’s by no means worth the current $100 price tag. As with other high-end games, that price will most likely go down over time so that more people will enjoy what this product provides.

DOOM VFR is a fast-paced shooter that many gamers from the old days will recognize easily. DOOM hasn’t really changed or ever needed to change much, but there have been a lot of much-needed updates that make this game more enjoyable for today’s audiences.

Thankfully, there are several difficulty levels for you to choose from within DOOM VFR. As with most fast-paced games, it will be a little hard to pick up at first. However, these games are also a lot of fun, and they often make the player want to continue, progress, and get better.

This game can be found on Amazon for around $.

The graphics are limited, but what’s here looks incredible. You’re often confined to a small environment, but it is still visually stunning.

The story within DOOM VFR is basically all about killing demons, as it was with the older iterations. The major difference in this one is that you die immediately at the start of the game and transform into something else.

DOOM is fun. That fact is well established. There’s a lot of replay value to keep you and you and your friends coming back for more. The fast pace of action, coupled with the nostalgia effect from an older game getting such a cool remake, results in a great experience overall.

The conclusions we’ve drawn after conducting this extensive Skyrim VR Review are pretty simple. The game itself deserves the maximum five out of five stars. However, since this game is on so many platforms, we have to evaluate each new version with a balanced perspective. That said, this Skyrim VR review focused mostly on the still-new VR experience PlayStation and other systems can provide. Essentially, we believe that VR technology makes Skyrim an entirely new game with new depths and greater player immersion. You can expect a totally different feel from other times you’ve played.

Skyrim VR  builds on an eight-year-old franchise that has stood the test of time. Regardless, the gameplay is still fun, leveling up skills are interesting, combat is varied, the stories are engaging, and the graphics are still stunning. The ultimate result of this Skyrim VR review is more than a 5-star rating for the game; it’s also our acknowledgment that this game may just survive forever.

The only real drawback of Skyrim is that it seems to put further delays on Elder Scrolls VI. One has to wonder how Bethesda plans to one-up Skyrim, and now, after Fallout 76, a lot of people are even more anxious. Until that day comes, we’ll have Skyrim, and it might be the perfect time to dive into VR.